By Click&Clean - Wednesday, September 22, 2021. Back in early March 2021, Google decided to switch to a faster four-week release cycle for Chrome Stable instead of the previous six-week cadence, and with even more frequent privacy and security updates.

So yesterday, just three weeks after the release of Chrome 93, Google released a major update to version 94 of its Chrome web browser for Windows, Mac, Linux, Android, and iOS users.

The new version of Google Chrome is primarily a security and privacy release that also includes new features and important improvements. To protect yourself from cybersecurity attacks and data breaches, check and update your web browser immediately by clicking the button below.

Google Chrome 94 resolves high-risk security vulnerabilities, such as the following:

Improperly implemented security check for standard - This vulnerability allows a remote cyberattacker to gain access to the user's sensitive information when the user visited a specially crafted malicious web page.

This new feature is available in Chrome 94 for desktop systems and android devices, which will try to ensure that you always load all websites over encrypted secure HTTPS connection, and if this is not possible, will display a warning on unsupported web pages.

To enable "HTTPS-First Mode," go to chrome://settings/security and simply toggle the slider for Always use secure connections on the Chrome security page. If the feature is not already available in your web browser, copy and paste chrome://flags/#https-only-mode-setting into the Chrome URL bar, select Enabled, and then restart Chrome to display it.

Another new Chrome 94 feature for desktop users is "Sharing Hub," which allows users to quickly generate QR codes, Copy links, Cast, Save pages, and Share links to Facebook, Twitter, Reddit, LinkedIn, and other social networks, from a single menu. 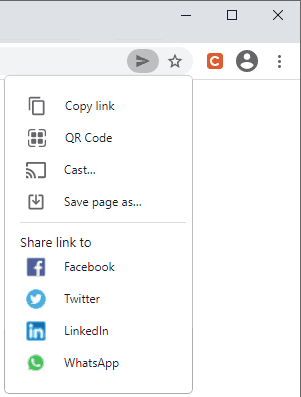 If the "Sharing Hub" icon does not appear in the Chrome omnibar, you can manually enable the feature with the following Chrome flag chrome://flags/#sharing-hub-desktop-omnibox